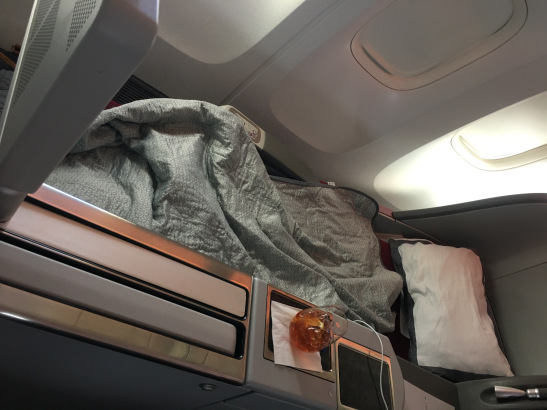 I finally board a last flight to London. I ask cabin crew if I can move to vacant window seat and am allowed. A bottle of water is pre set under armrest. Just as in the previous flight (KUL-DOH), passenger can order anything at menu at any timing.

So, I have a breakfast before taking a sleep. Okay, it’s time to sleep. Make up a bed. Scene over the window is desert. It’s so Middle East. Several hours later. I wake up and have a small sweet. And the scene outside changes to Europe’s. Okay I am arriving at London finally!!!

Cabin crew asks me ‘How was our flight?’

I answered ‘Actually I booked Malaysia Airline and was just transferred to your flight due to aircraft defect. But I am surprised your service is much better than Malaysian’s’.

The crew smiled and said ‘I expected the answer!’

Hahaha, she is a funny crew.

When I alight the aircraft, I just see a Malaysian A380 which I supposed to take.