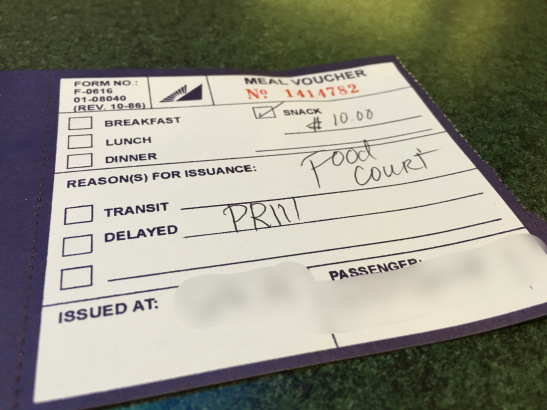 Do you remember I was planning London trip?

I prepared luggage and was ready to go.

My flight was Guam to Manila on Philippine Airlines (Economy class) and Manila to London via Kuala Lumpur on Malaysian Airlines (Business class). I get window seat. 10min before boarding time, public address was made.

‘Your flight is delayed due to aircraft servicing. Please pick up meal coupon at boarding gate’.

Re, really?! You provide meal coupon? Then, I guess the delay will be at least 2-3 hours. At the same time, some complimentary snacks and drinks are set at pre departure area.

After all, the flight departed 3hours delay.

When I arrived at Manila, it was almost a departure time of my connecting flight of Malaysian Airlines already. I proceeded to transfer desk to ask how I should do. Oh it is a great offer. It would arrive much earlier than Malaysin’s.

However, I really wanted to take Malaysian as I want its flight miles.

I asked the agent if I can be accommodated in next available Malaysian flight.

The agent called Malaysin check in counter and its manager.

And, Philippine Airlines manager approved the agent to issue FIM for me. Wilipedia says ‘FIM is a document issued by an airline as a substitute ticket coupon when the passenger’s original travel is disrupted by schedule change, overbooking, or cancellation’.

It means Philippine Airlines shoulder some costs for the rebooking.

However, Malaysian Airlines refused it and asked Philippine Airlines or me to pay rebooking penalty USD3300 in cash.

It is almost double of my original ticket.

After all, I gave up the flight…

I cannot pay USD3300. And, of course, Philippine Airlines cannot pay such a big penalty.

At this time, I purchased Philippine Airlines ticket and Malaysian’s separately.

In general rule, airlines are not responsible for the connection and it is passneger’s own risk if connecting flight is in separate ticket.

Philippine Airlines took care of me beyond the policy already.

Okay, I really gave up to fly to London…

Philippine Airlines provided me a hotel with free shuttle and meal at Manila.

So, at least, I had a place to sleep on the night. Do I spend my 5days vacation all in Manila? Or  I go somewhere???