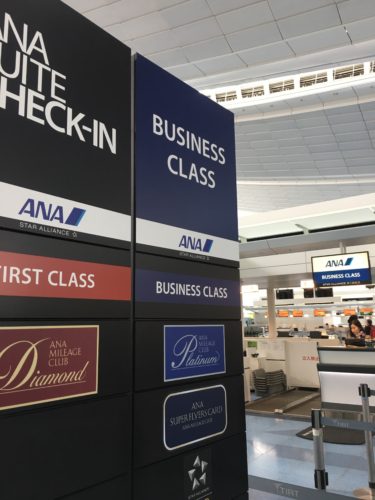 As I wrote in last post, I came to Tokyo Narita to take ANA to Sydney.

There are 2airports in Tokyo, Narita and Haneda. I leave Narita and arrive at Haneda by airport limousine bus. The bus costs about JPY3000 (USD30). Haneda airport is so Japan’s airport. I come to ANA’s counter and check in for Sydney flight.

As Haneda is ANA’s hub airport, the counter is always open and can check in anytime for any flight. I clear security and immigration, and come to ANA’s lounge.

The airport has got 2 ANA lounge but,,, The one I visit is closed… Okay, let’s go to another one. Okay, it is open. ANA’s corporate color is blue. The lounge also has got the color.

ANA always announce that it is 5star airline. And it emphasizes that ‘Japan’s only 5star airline’. Yes, it’s competitor Japan Airlines has got only 4star so far. ANA paints STAR WARS also in some of its aircrafts. As I take looong flight to Sydney, I want to take a shower.

I know a shower in Japan’s airport is always crowded. Luckily I am kept waiting only for 10min at this time. The shower room is small but has got enough amenities for use. Time flies fast when I am with SNS. I will introduce ANA’s business class service in next post.