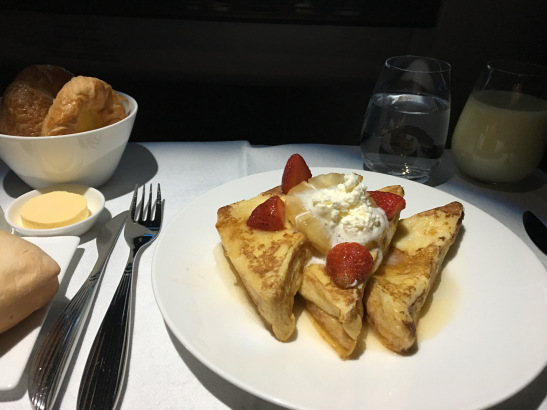 Anyway, I was transferred to Qatar Airways (QR)’s flight from KualaLumpur to London via Doha after negotiation with Malaysia Airlines’ manager. There is a space behind the seat and a bottle of water is pre-set there. It’s good coz I don’t need to call cabin crew just for water. After boarding, cabin crew comes to greet and hand meal menu and a amenity with pajama. The amenity is Georgia Armani’s.

Eye mask, a pair of socks, after shaving cream, lip cream and a small fragrance are in it.

In QR’s business class, guest can order anything in menu at any timing.

It means it’s my choice when to eat, what to eat.

It’s good. I feel like I am feeded at short flight economy class sometimes…

I order only appetizer coz I had enough food at MH’s lounge already. I ordered Oolong tea. I expected iced one but it is actually hot. By the way, cabin crew who serves me is truly the best cabin crew I have ever met.

She may be Chinese or Taiwanese, I guess.

She is very friendly and comes to me at the best timing even if I don’t call her.

And she talk to guest only in body language when most guests are in sleep. She knows what guests expect well.

Okay, anyway, I am very tired after taking 2 flights (Guam to Manila, Manila to KualaLumpur) and being offloaded from midnight flight. You can see it in my face. Okay, make the seat full reclined and have a sleep. I don’t know how many hours I have a sleep.

When I wake up, the cabin crew asks me if I want to have something for breakfast at the best timing again.

It’s good. At most airlines I know, cabin crews also take a rest when guests are in sleep and don’t pay enough attention for cabin.

Only All Nippon Airways was exception when I took their Paris – Tokyo flight, but their cabin crew rather came to cabin too much even while I was in sleep and woke me up for several times. (I know they are trained to check lavatory very very often during the flight… For me, it’s too much though)

Okay, I have French toast for breakfast, or course with oolong tea. I am surprised that flight is already arriving at Doha. It is about 7hours flight but I felt it much shorter because it is so relaxing.

Yes, it’s worth to be awarded for the best business class.

At this time, I am transfered from MH, but decide to book it by myself next time.