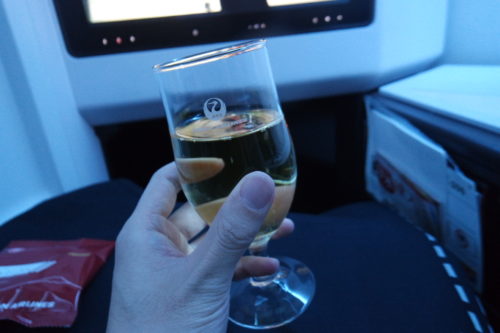 I like HongKong and visit there more than 10 times.

I always take ANA, Cathay Pacific, HK Express and once Air India. So it is my first Japan Airlines (JAL)’s HongKong flight experience. At this time, I book Business Class ticket.

Aircraft is B777-200 which is equipped with SKY SUITE 3 Business Class seats. There are looong queue at boarding. Can you believe this is PRIORITY boarding? I board after the queue is cleared as I don’t like queuing long.

SKY SUITE 3 is the newest business class seat on JAL. It is so called Herringbone type seat. I have window seat, so no one is seated next to me.

It is first time I see jacket hanger is pre-set with all seats. When I took ANA’s business class on HongKong flights, cabin crew came to greet before take-off. JAL crew doesn’t do it actually.

They look so busy throughout the flight. I push ‘CALL CREW’ button to ask for a drink and crew come to me 5min later. My seat is just next to galley. Why do they need 5min just to come to 3steps away?

I have one more episode on this flight.

I chose Japanese meal but crew comes back a few minutes later to ask if I can change my meal to western meal as Japanese meal is out.

Of course I say OK. It is not a big issue.

The crew offers me to still have Japanese entree (Boiled pork) with western appetizer as only appetizer is out in Japanese meal choice. I accept it. Actually it is not really good to have boiled pork with bread… But, I am still okay with it.

The issue happens after I finish the pork.

Flight Purser, incharge of the inflight service, comes to apologize to me and says ‘Sir, we are sorry for having you have western appetizer. I can still serve you Japanese rice if you like’.

What did I have the entree with bread for? You should have told me before I finished it. Then, I didn’t have any problem.

Actually this flight doesn’t… I should try another JAL business class to see if this is the JAL or it happens only on this flihgt. I will review when I take JAL again.